Dropping down off the Hoback Rim and into the high desert vastness of Wyoming does not go unnoticed. We left the Snake River Valley just south of Jackson Hole at Hoback Junction. We head southeast and the climb begins.

The road follows the small Hoback River through a winding canyon where winter avalanche warnings were stern enough to have me watching the steep cliff walls as we drove in summer.

The ride is beautiful. A crystal clear stream, the high peaks of the Gros Ventre Range to the northeast and the Wyoming Range to the south. The small town of Bondurant is picture perfect. We crest the Hoback Rim and our elevation is nearly 8000’.

As we descend, the horizon opens, trees become scarce, and the landscape is rolling sagebrush meadows for as far as the see. The Wind River Range dominates the horizon to the east. The Green River is born in the northwestern portions of these mountains.

Nearly 10 miles south of the ‘Rim, the Upper Green River flows under the Highway at Warren Bridge. While pretty, seeing the river here does not tell the story. Instead, turn on the BLM road just north of the bridge and travel the good gravel road for about a mile. The road rises and turns. And then you see it, the Upper Green River with the spectacular Wind River Mountain Range as a backdrop, could there be a more perfect setting? 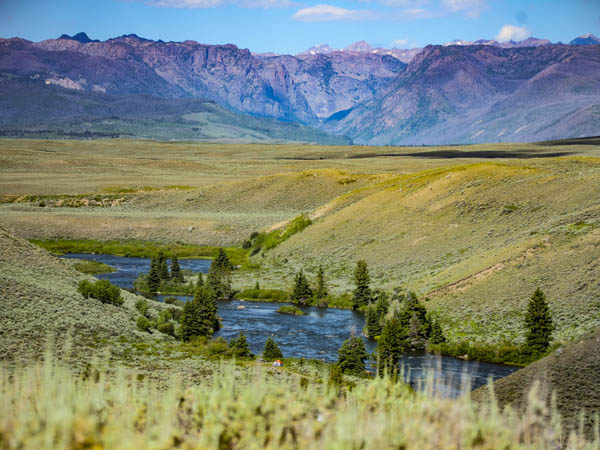 The Upper Green River with the Wind River Range in Distance 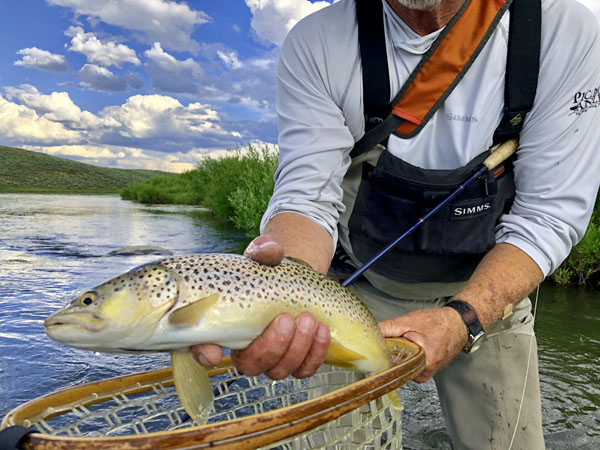 About the Upper Green River

Free flowing and clear, the river flows from the mountains into the sagebrush landscape. Runoff ends usually by the end of June. Even in high water the river fishes, according to the nice folks at Two Rivers Fishing Company in nearby Pinedale, WY. While the river gets big, it runs clearer than most during highwater.

July starts the top-water action as the water levels drop. Every year is different and this year (2019), levels were on the high side. Even higher than normal, we found the river to be wade-able and most fish reach-able.

The Green River is more than 700 miles long, and in several places on that journey, has epic fly fishing. On this trip, we fished the river upstream from Warren Bridge to the Green River Lakes.

Hatches on the Upper Green River

In season, The Upper Green is all about hatches. Green Drakes, Golden Stones, Yellow Sallies, PMDs, Caddis, Trico, and Callibaetis are the highlights. The river, at times, is a conveyor belt of food. With a short summer season, the hatches are compacted into a shorter time frame.

This year, we arrived for the last week of the Green Drake hatch. Big bugs and eager fish.

In the morning, the drakes would hatch, flop clumsily around in the surface film, eventually dry their wings, and fly away. For most, it did not go like this. The trout picked them off unmercifully. “How could this insect species continue?”, I wondered at times.

But then the morning came when the drakes did not hatch. In the air and on the water, green drake spinners proved that life goes on no matter how many fledgling drakes were consumed before fulfilling the life cycle. 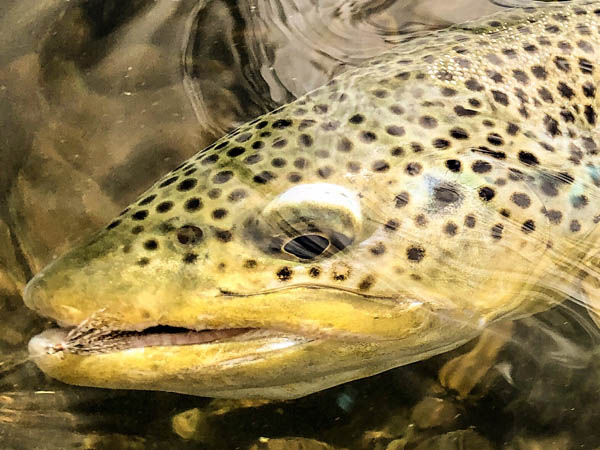 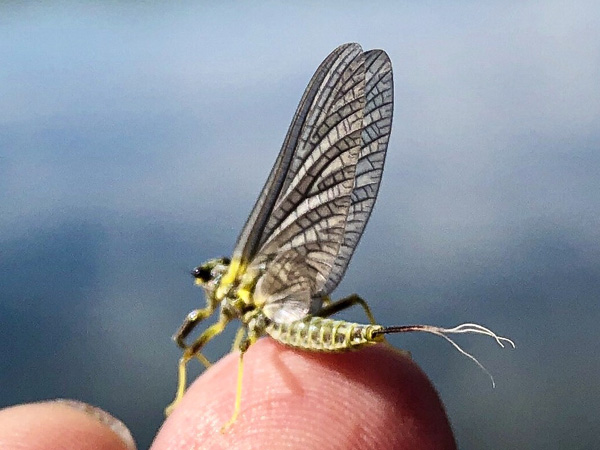 We tended to ‘rough it’ on this trip. While Pinedale is a lovely town that has everything you’ll need, it’s more than 10 miles from the river. So we camped. This year we split our time between Rim Station, a nice convenience store with RV hookups and wifi, and one of the remote, no amenity, campsites on BLM land upstream from Warren Bridge.

There is good cell service at Warren Bridge but is nearly non-existent upstream. If you are like me, and work a little and fish a little, this is something to be aware of. Pinedale has great cell reception, restaurants, saloons, and drive through liquor stores – hey, it’s Wyoming!

At more than 7500’ above sea level, the sun can be pretty intense. Be sure to bring sun protections, hat, shades, etc. And while the daytime temps don’t seem that warm, full sun at 7500’ is intense. Bring warm clothes too. Clear nights have frost. There is only a handful of frost-free nights in this rugged locale.

You’ll find the Warren Bridge Fishing Access along Highway 191 in Daniel, Wyoming. Access the river from both sides of the highway. On the north side, BLM Road 5201, a good gravel road, brings you to 12 fishing accesses on the Green. We write about these access in much of this article.

Downstream, access the river at the Fish Hatchery on Pape Road.

For upstream access, you need to head east on Forty Rod Rod, just off highway 191, and then take a left on 352 and head toward Kendall Valley. You are headed into amazing wilderness. At Kendall Valley, river access is found at the end of the pavement. There is a boat launch here. Continuing on, the road is gravel. Depending on when the last road maintenance occurred, this could be an enjoyable, or not, 12 mile drive. Is it worth it? YES

The land along the road is a mix of public and private. There are pull-offs where you can access the river. As you get closer to the Green River Lakes, Squaretop Mountain rises and is quite dramatic. This was one of my favorite things we did on this trip – fish the lake and the river below the lake in this amazing land. 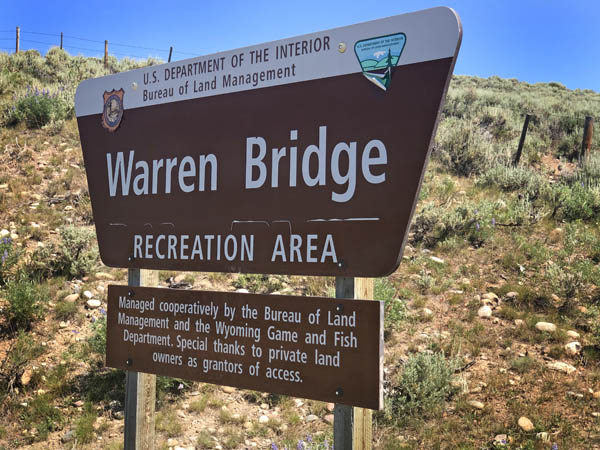 We found the Upper Green River to be very wade-able. We waded at 1400 cfs but at 900 cfs, we could get everywhere we wanted to reach. I like to wet wade. It can be a cold river to wet wade, even in July. But if you are like me, and have a “kinda like-but really hate” affair with waders, you’ll be able to tough it out too.

Many folks float the river. Obviously the higher the flow, the easier it is to float. We see folks in canoes, kayaks, driftboats, rafts, and kickboats fishing the river. All great approaches with flows above 700 cfs. 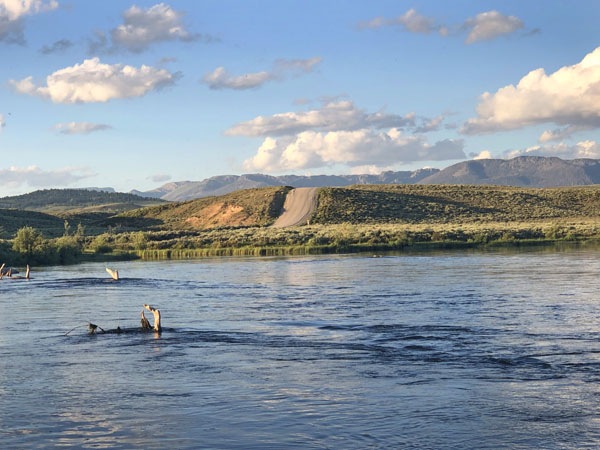 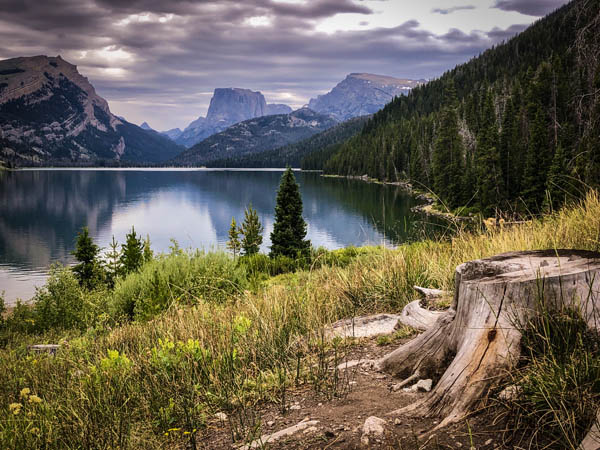 The folks at Two River Fishing Company is downtown Pinedale, were great. They were quick to offer fly suggestions, talk about current conditions, and share information about other times of the year to fish the area.

Two Rivers offer guided fishing trips on the Upper Green and New Fork River (on our 2020 to-do list) as well as the Hoback and private local waters.

Also in the downtown you’ll find the Wind River Brewery. Great brews, food and atmosphere. Lots of anglers hang out here so its also a good spot for talking fishing. 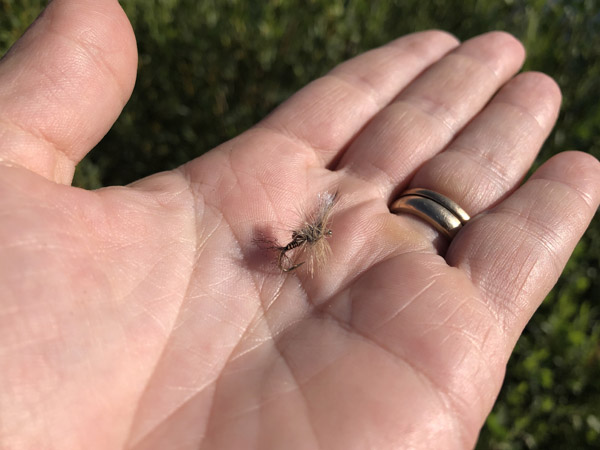 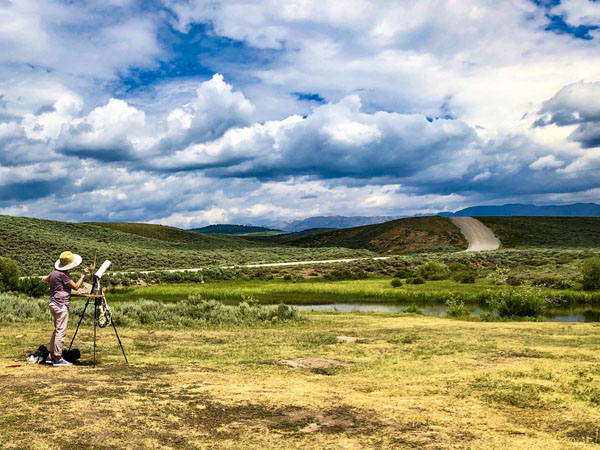 Flies That Worked For Us

It’s always wise to check in with the local experts. Here’s what we used during our trip from May 24 to June 1, 2019.

I’m not sure why this area haunts my dreams. Catching a bunch of brown trout on dry flies? Maybe. My adventurous side tells me it is more about where else there is to fish here.

We spent a day driving towards the headwaters of the Green to Green River Lakes within the Wind River Range. Just spectacular. And while the lakes are downstream of the rivulet that births the Green, standing beside the still waters that reflect granite peaks, stirs the soul. There are many, many cirque lakes in those mountains.

Or perhaps it is social media that is the constant reminder of the area. Posts from the local destination marketing group jam my feed. Facebook tells me I’m a top fan.

Should we bring the driftboat next year? Should I pack my water master?

I see myself wading out mid-thigh to cast towards the ring-makers in the bend pool below the lakes while Squaretop Mountain watches. The dream repeats with these favorite locales at least twice a week.

We should book a drift trip downstream of Warren Bridge to see new water, I tell myself. But give up a day I could explore Kendall Valley?

Our picks for fishing information, food, and places to camp. 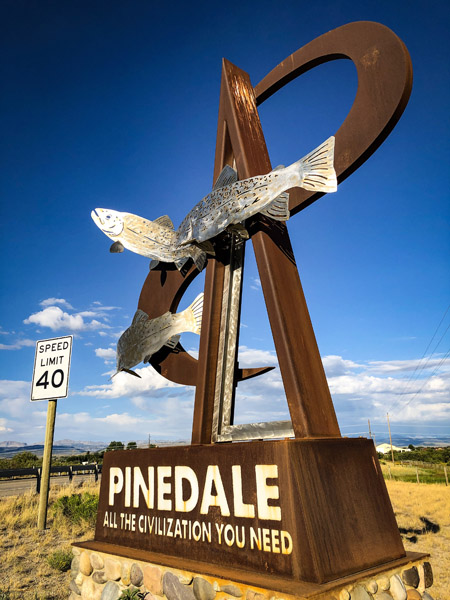 In 2019, we spent 3 weeks fly fishing the Green River so we got to get to know the town of Pinedale pretty good. We enjoyed an outdoor concert in the park, shopped like a local at Ridley’s, and did our laundry beside the hardworking oil field workers who use Pinedale as a home base.

The Wind River Range looms to the north and east of town. Pinedale is a gateway town to Winds. The Astorians were the first white men to travel through this country. The fur traders established an annual rendez-vous and met yearly to trade goods and furs and often met near Pinedale. Local interpretive signs tell the story.

Just a short drive from town, you’ll find some beautiful blue-green lakes with the towers Winds reflecting in the cool waters. Fremont Lake, Soda Lake, and Half Moon Lake lie at the foot of the mountains.

Antelope graze the flat lands outside of town. Mule deer pass through these lands on their migratory routes. This is a rugged land; Pinedale is the oasis.

Fishing is fun, but in such a special part of the world, it’s good to take a day or two and look around. Here you’ll find national parks, hikes into the Winds, a brewery, and crazy-amazing mountain scenery. Jeez, the Tetons, the Gros Ventre, and the Wind River Range! Wow!

Road Into The Winds Video

Video of Fly Fishing the Upper Green River in Wyoming 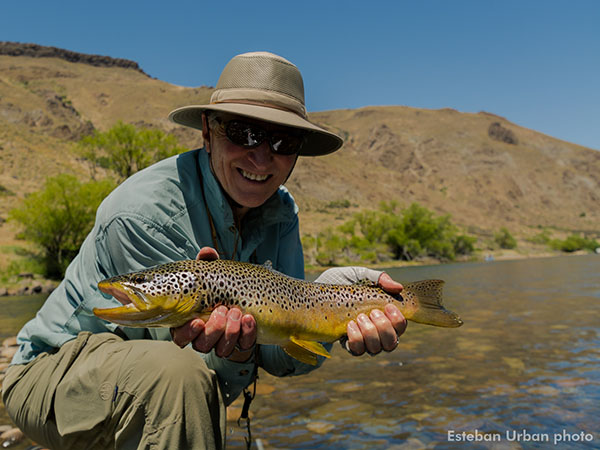 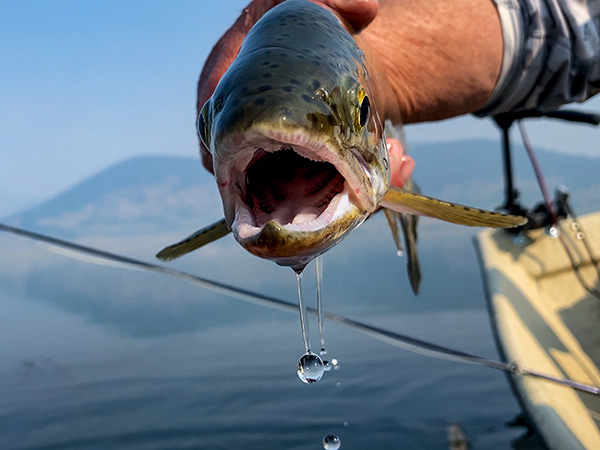 The Gulpers of Hebgen Lake Gallery

The Gulpers of Hebgen Lake

The Road Into The Winds Gallery 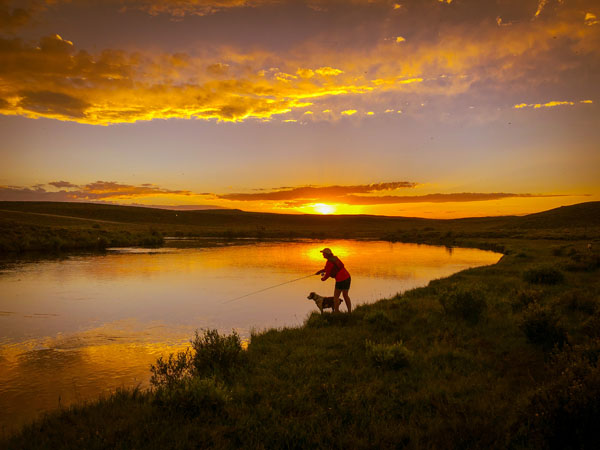 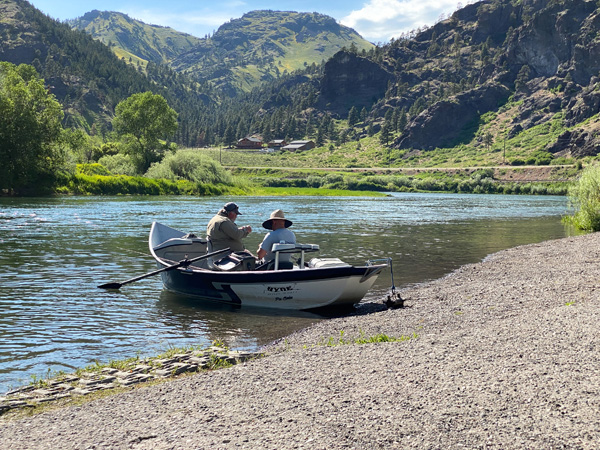