Days on the water are always more memorable and fun when joined by friends. The same goes for the days I fish with my dogs.

Fishing is not for all dogs. Some have no patience or attention span to sit quietly while Master casts endlessly. Others rather be home watching Animal Planet on the sofa.

But some dogs, the special ones, are as obsessed with fishing as Master. Could it be coincidence that best fishing dogs are also hunters?

It All Started With One Rising Fish

Our first fishing trip with dogs happened many years ago in 2002. We rented a home on the Bitterroot River in Montana for the month of April while the snow in northern New Hampshire melted. Pre-runoff fishing in Montana can be amazing. This year, the river rose earlier than expected so we looked for an alternate fishing destination before ending the vacation and returning home.

We headed south toward the Green River at the Flaming Gorge Dam in Dutch John, UT. We floated the Green the first day – had an amazing time, but spied some slower pools not far down from the dam we wanted to explore more. Leaving the raft behind, we trudged along the path, with two unruly Brittanys on leads. 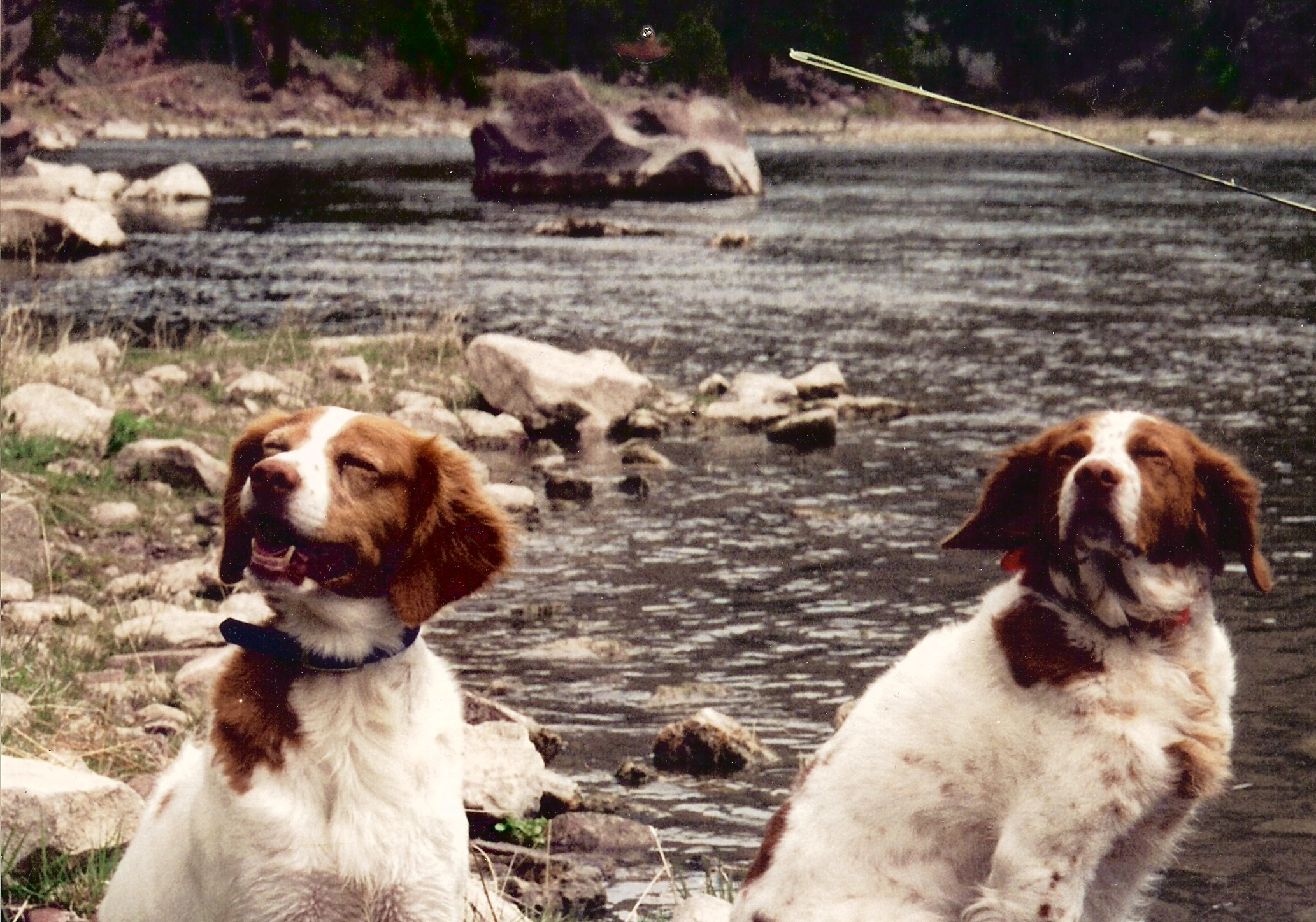 Fishing With Whining Dogs Tied Up Nearby is No Fun

I was walking downstream to find a new spot with the pups, when our older dog, Beau, spotted a huge cutthroat rising in a back eddy. He absolutely froze. Perhaps it was our high vantage point above the river why he noticed the trout. But there he stood, locked on point, with a big cutthroat gulping mays rhythmically in the foam line in the river below.

I’ll spare you the details of the cast, take, fight, and landing him. What was remarkable, however, was what occurred when we lifted the fish for Beau to sniff. He was curious, of course, he had never seen a fish before. I lifted the trout, my largest cutthroat at that point, Beau leaned in for a sniff as Tim held the lead, and that trout snapped his big jaws at my surprised dog. For Beau, it was game on. He lunged for the fish, Tim pulled back on the lead, and I quickly returned the cutthroat to the river, unharmed.

From that day forward, fishing with Beau turned fly fishing from a solitary experience to a team sport. No longer did he roam the edge of the river looking for grouse or dead things, instead he would scan water’s surface or watch the strike indicator or dry fly with more intensity than some anglers.

He once knocked me so hard behind the knee with his nose, I lost balance and set the hook on a big Missouri River rainbow trout all at the same time. Another time, after becoming impatient with my lack of success on the Clark Fork River, he snuck through the bushes and leapt out as a nearby angler hooked into a big brown. “I almost thought I was back in Alaska, and instead of a bear jumping it to get the fish, it was a dog”, proclaimed the surprised fisherman. 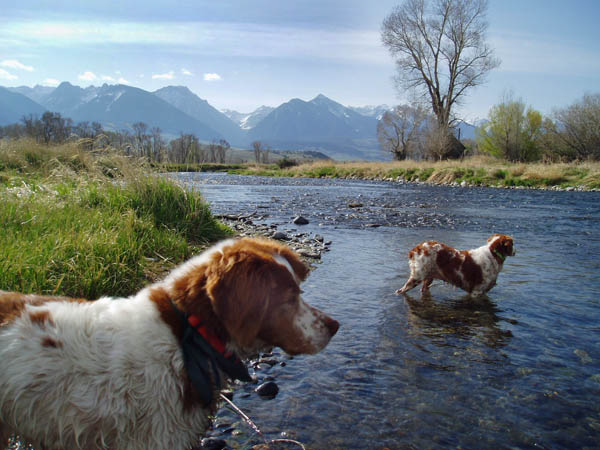 “Beau” and “Dee” Watching For Rises at Depuy’s Spring Creek 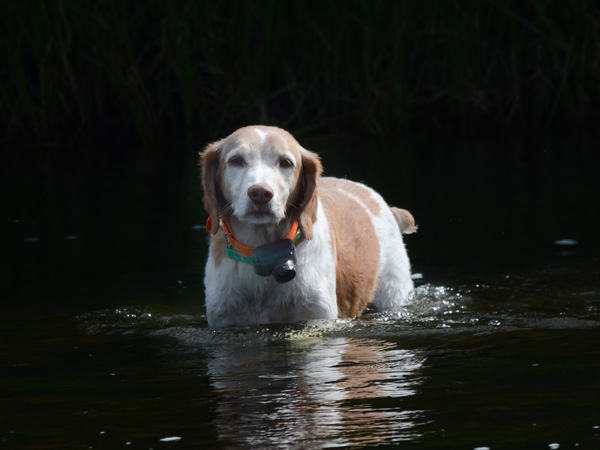 “Pie” Wading into the Big Hole River While I Fish

Life is Better When You Fish With Your Dog

Beau was the first of our hunters to obsessed with fishing. Lucky for me, Dee would follow Beau’s lead, and now Belle found her new passion last season.

Dee was special. She ‘found’ me one day while fishing Rock Creek. After inquiring, she needed a home so we added her to our pack. She quickly learned the ropes of guiding upland bird hunters in NH, and always joined us on our fishing trips to Montana.

After she ‘figured out’ fly fishing, Dee could be bossy. And impatient. If she saw fish rising and you weren’t catching, she’d bark a terrible high-pitched noise that alerted you to your short-comings.

One April day on the Bitteroot River, we arrived at a favorite spot to find the March Brown hatch just getting underway. With Beau on the left, Dee on the right, I began catching fish. Fly fishing is a skill. But a greater skill is landing and releasing fish while dogs are trying to come in close for a sniff, all the while keeping hooks out of dogs and dogs from touching fish.

To my right, I hear a rise. It’s shallow water, so I pay no attention. It keeps happening. I casually watch. There is an enormous brown trout sipping March Browns as they glide by; headed for the deeper pool I’m fishing.

I leave my successful spot and walk way out and around the brown trout and enter the river upstream. Neither dog follows me. Dee begins to shriek. It’s not even a dog sound. How could I leave rising fish? I invite her to join me. She refuses while Beau remains laser-focused on the rising trout before him.

First cast is spot on and I have a 23″ brown fighting at the end of my line. I call to Dee who sees the big fish and begins to SCREAM. I’m not sure if she was mad at me or herself for not coming along, I never saw that dog as upset as she was that day. 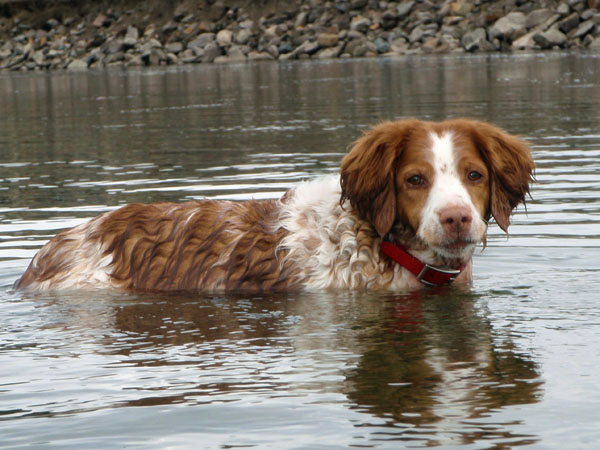 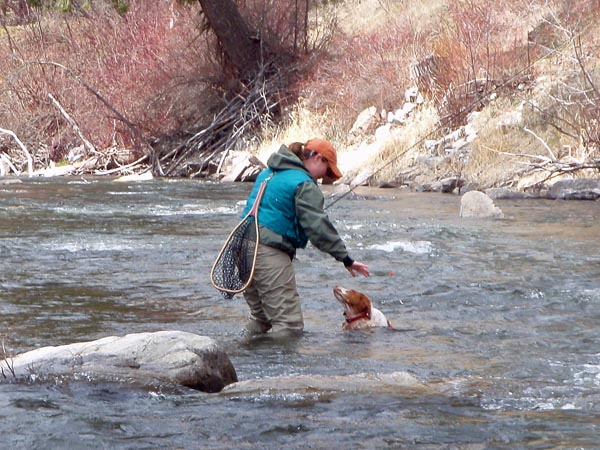 Brittanys are super energetic dogs. They run at top speed much of the time, not always paying attention to anything other than running and hunting. We keep our pups leashed much of the time. Or, we use hunting collars to remind them to stay close. Mishaps still happen…

Muskrat Love – Not So Much

With Beau and Dee, leashes were not as necessary as with our other dogs. When we we on a river, they stood solidly at my side, always afraid they would miss something. One day while fishing a spring creek, I returned to the car to meet friends for lunch. The dogs followed.

When lunch was over, Dee had gone missing. It was not like her. I called and she quickly appeared, ashamed and bloody. She had killed a muskrat but not before it had bitten her several times. We cleaned the wounds, glued larger ones closed, and fitted her with a shirt to keep her from licking the bandages. For her, wearing the Shirt of Shame while her woulds healed, was the worse part.

Some dogs navigate barbed wire just fine, others do not. Pie and Belle have no barbed wire skills. The worse injuries have occurred with 1/10 of a mile of our home in Montana. The’ve each been stitched at least 3 times each.

Picture this – a favorite fishing access where we regularly run the dogs. We’ve been here a million times. The dogs know the paths, we can see them easily, and the warning beep on their hunting collars works perfectly to remind them no to go far.

I’m following behind. Pie is motionless. I catch up and see him face to face with a very mad and very large rattler who has elevated himself enough to look into Pie’s eyes. How I ever got the courage to get so close and grab that dog by the collar, I’ll never know.

Fish were a curiousity that smelled funny until one day I gave a dying, foul-hooked whitefish to Dee. I didn’t know any better. I’m sorry and I was very wrong.

She devoured the whitie and two things happened. She stopped viewing fish as a fun thing to sniff and now viewed them as food. And, as it turns out, whitefish give her the most disgusting farts ever emitted by a dog. 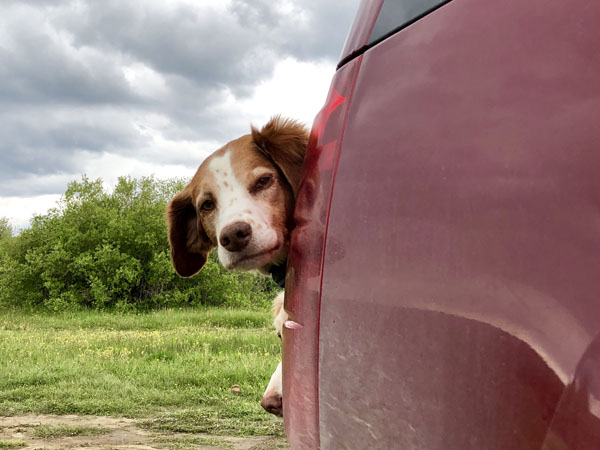 I Don’t Want To Stay in the Car 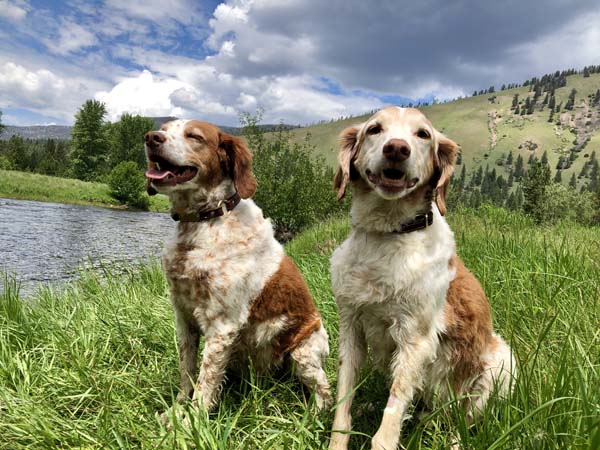 “Belle” and “Pie” Pose For Pictures

Last summer, Tim and I had an amazing evening fishing in Wyoming and camping along the Green River near Pinedale. It was just one of those evenings when everything goes right – the fish rise, your fly choice is right, the weather is perfect.

But more than that, it was the night Belle, our youngest Brittany, learned the joy of fishing.

She knew we did ‘something’ when we walked off with fly rods in hand. But tonight, as she watched over the river, she saw us catch fish, reel them in, and allowed her a quick sniff before they returned to the dark waters.

We quit fishing as the sun slipped behind the sage covered hills, kicked back, made an adult beverage, and watched thunderheads punish Jackson Hole to the northwest.

But not Belle. Her eyes scanned the river’s surface for trout. Like the hunters who came before her, that night she joined the team. I snapped a few photos of her and put them on the ‘gram and Facebook.

Shortly after the photo hit social media, longtime friend and amazing artist, Jeanne Labounty, messaged me to ask if it was okay to paint the scene from the photo. I agreed and forgot all about it until a couple months later, Jeanne messaged me with the photo you see below.

Her work is simply amazing. The oil painting so captured the night, we bought it on the spot. (We really surprised her, she had the intention of gifting us a print)

Jeanne and her husband Tim live in Harrison, Maine. You can see more of her work on Facebook. 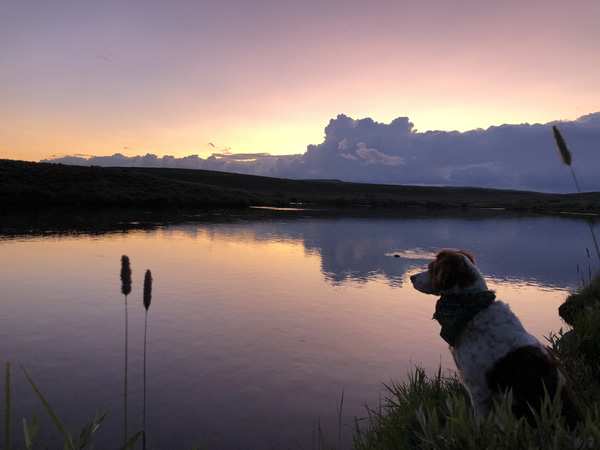 Photo of “Belle” on the Green River 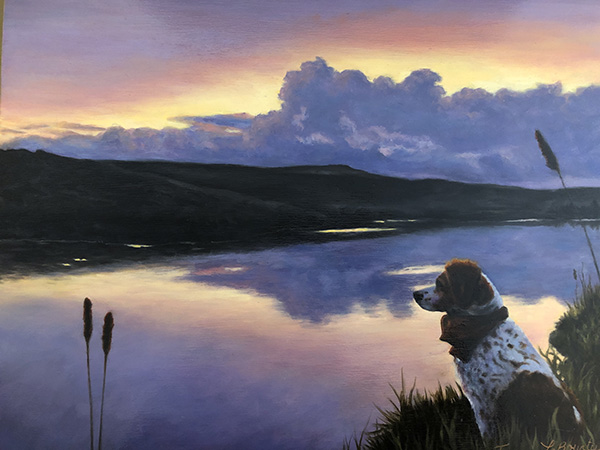 Oil Painting of “Belle” on the Green River

There is a fun hashtag in Instagram #fishingwithdogs. Check it out for more fun photos from others or add your fishing dog photos there. 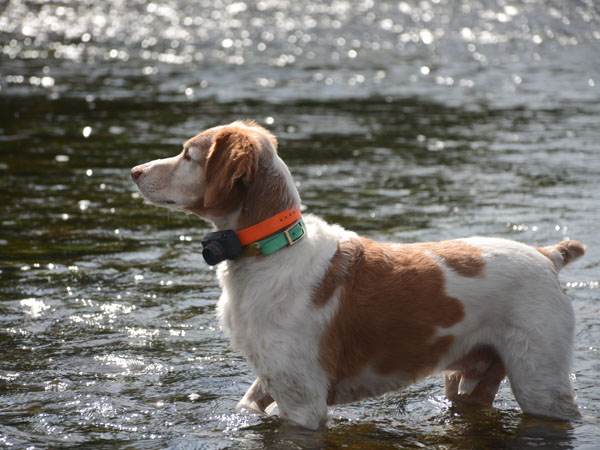 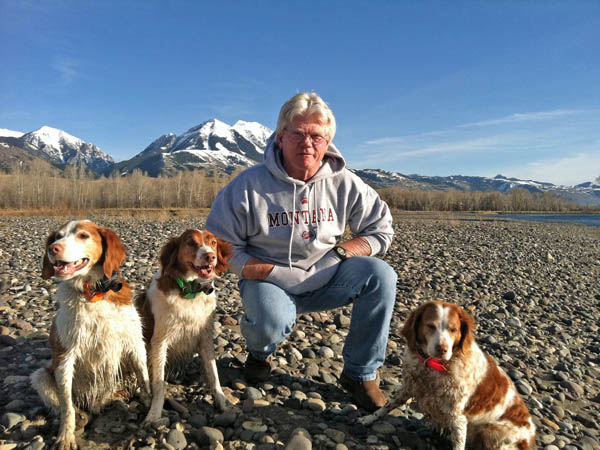 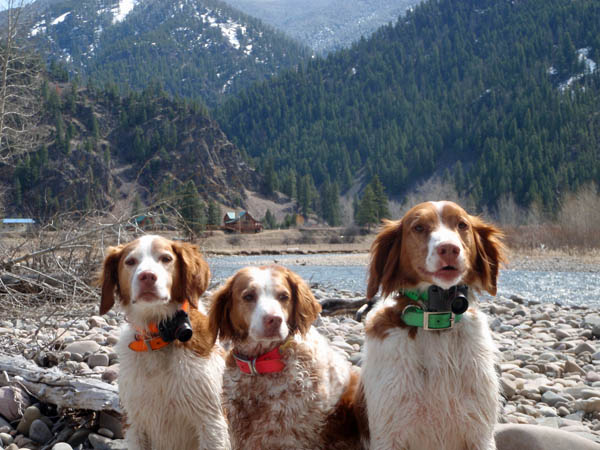 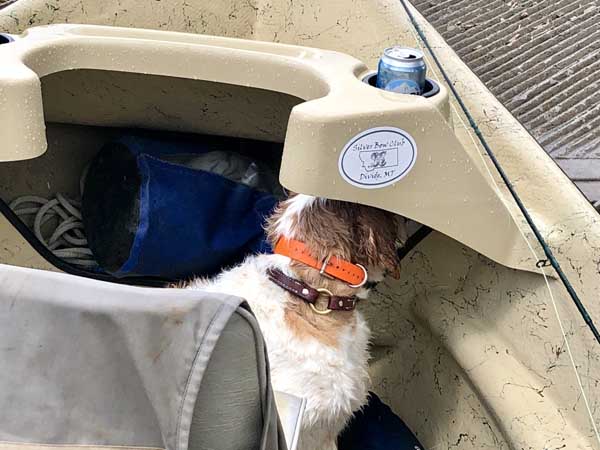 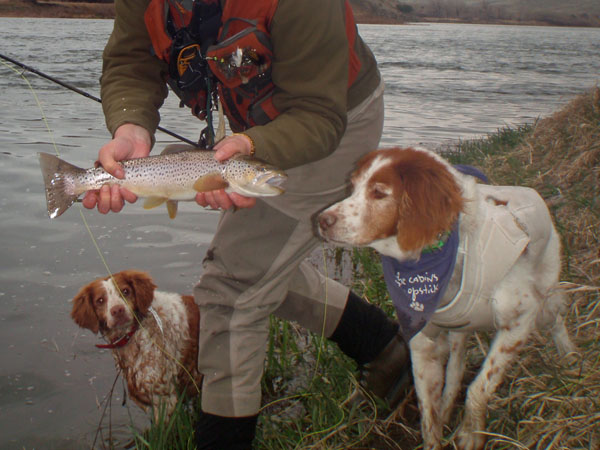 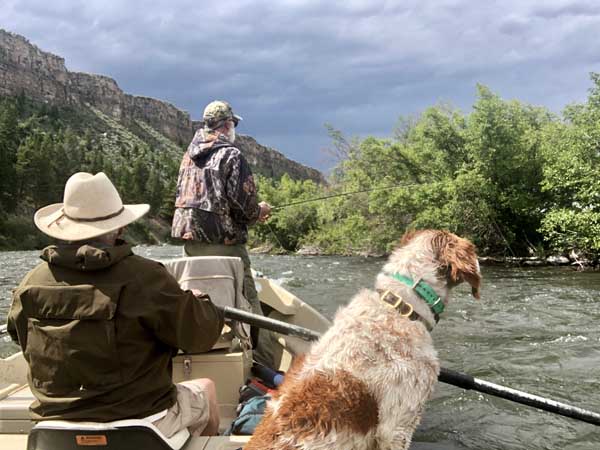 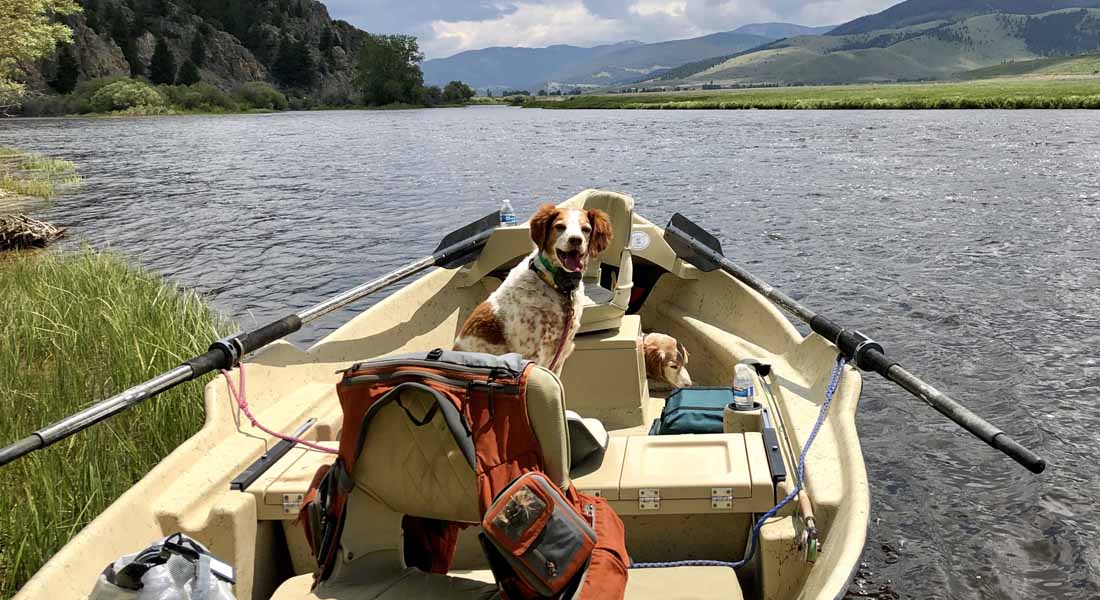 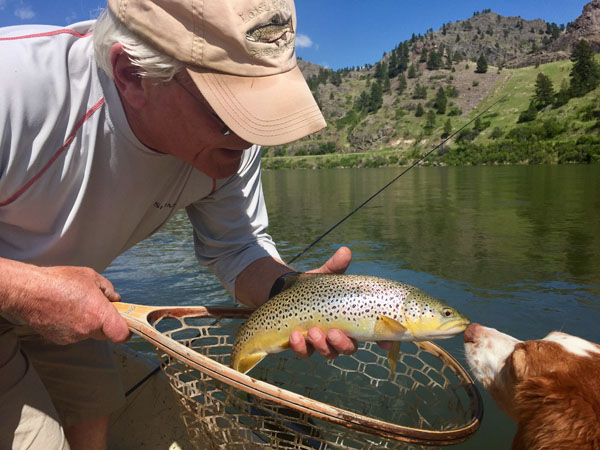 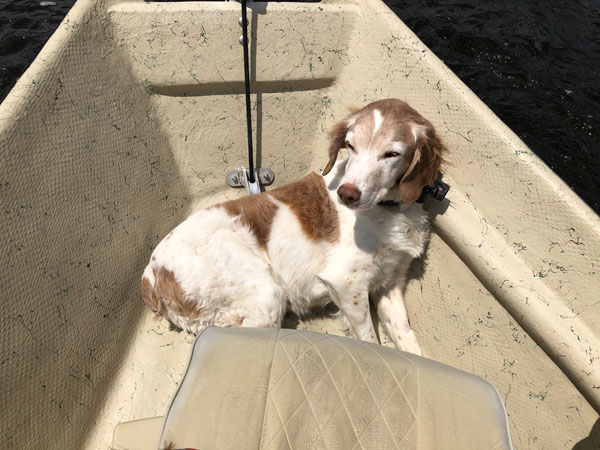 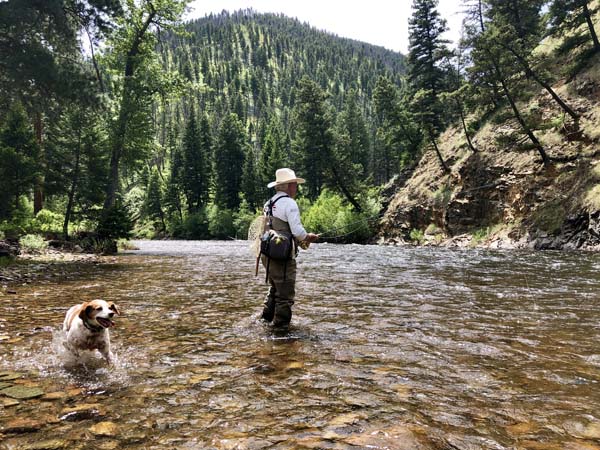 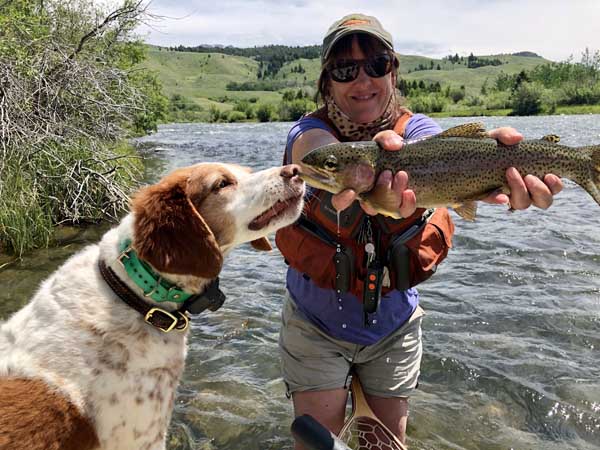 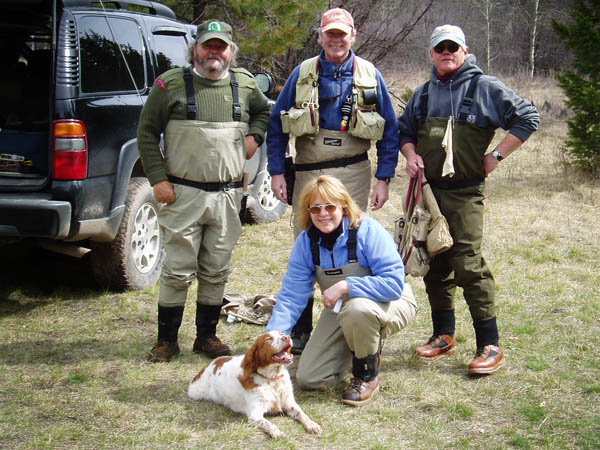 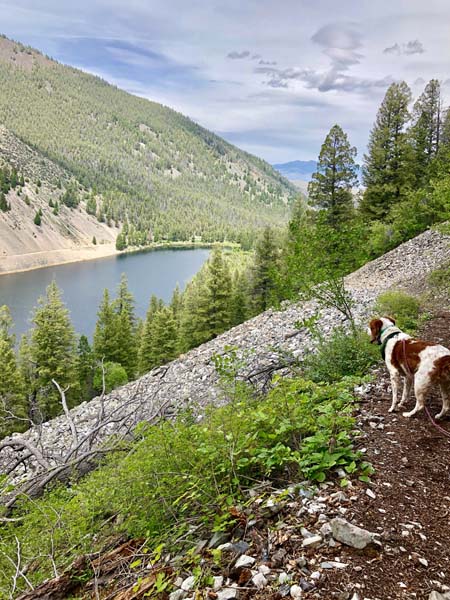 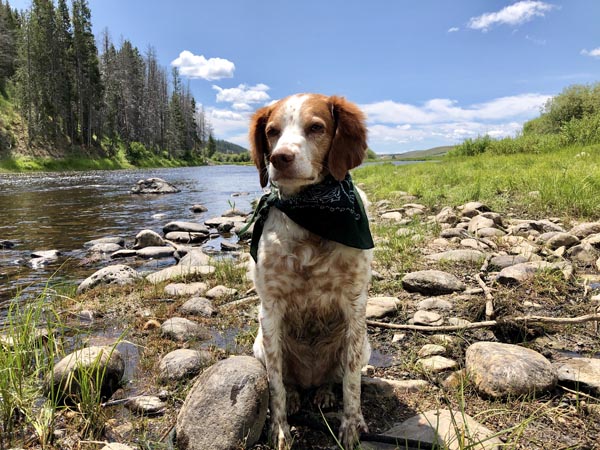 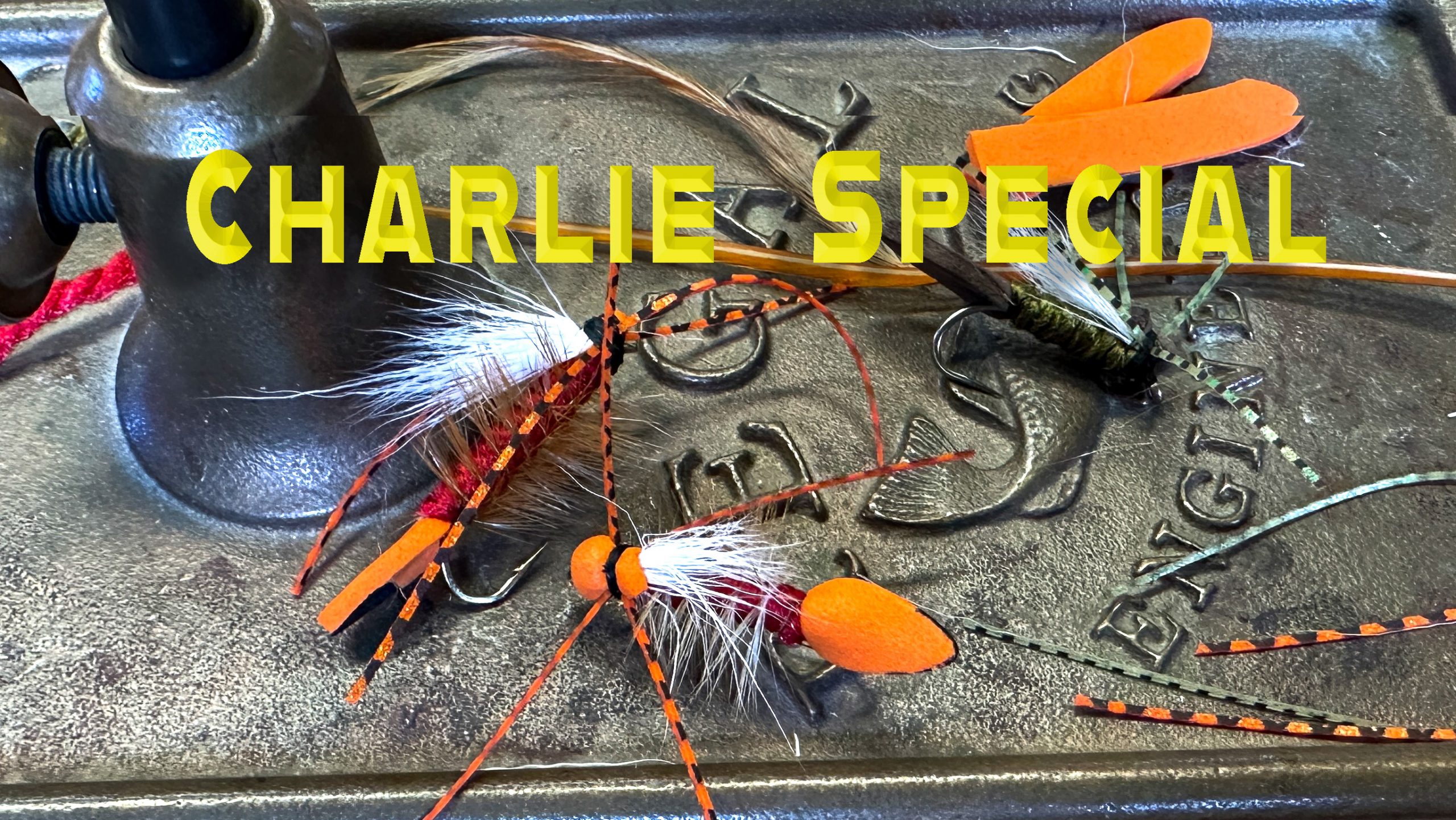 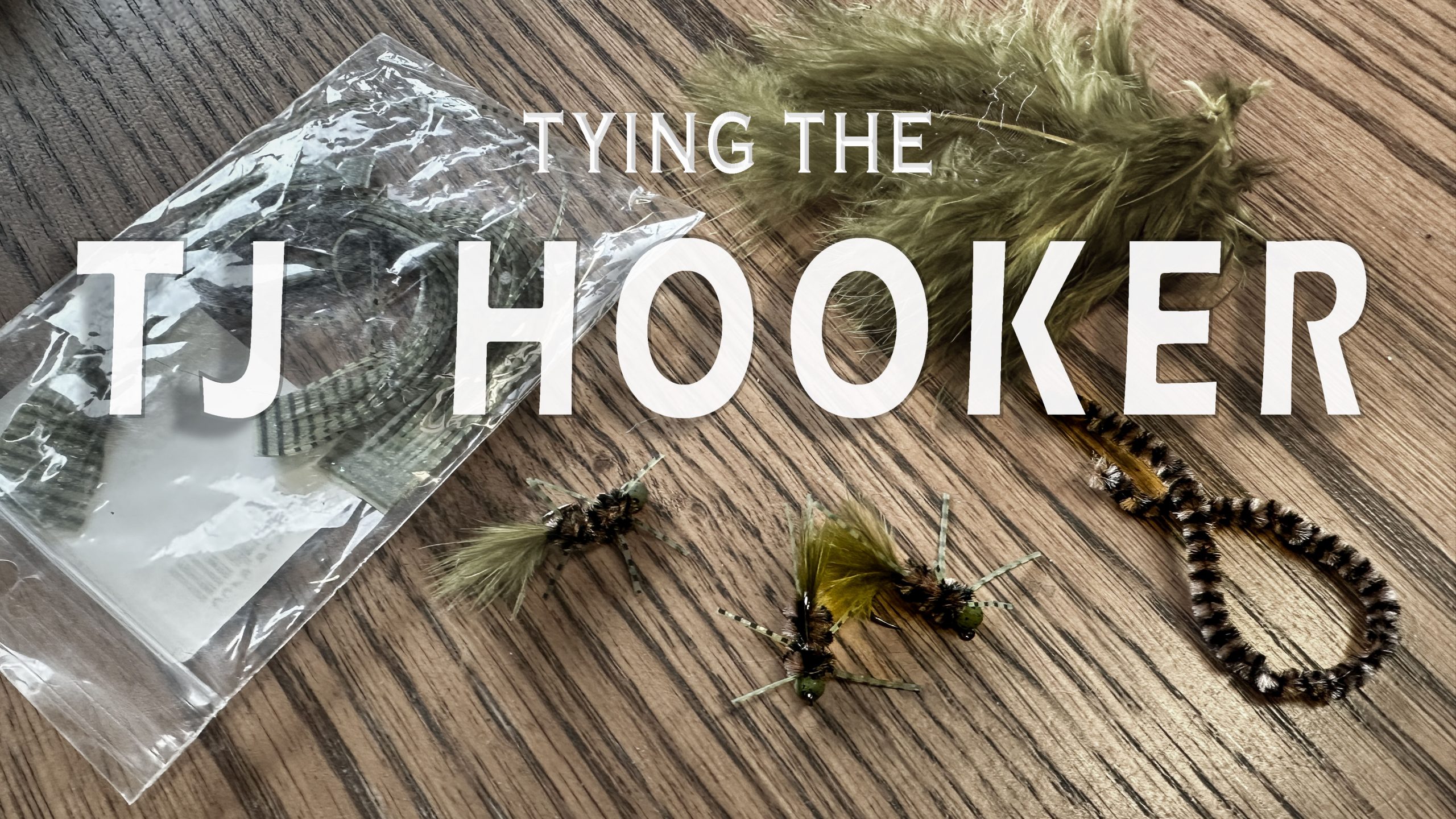 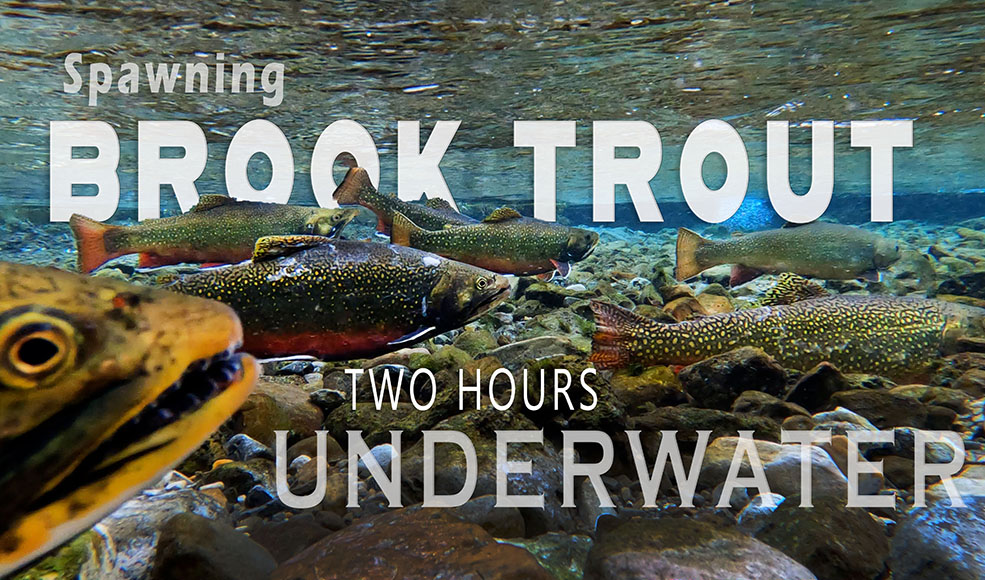 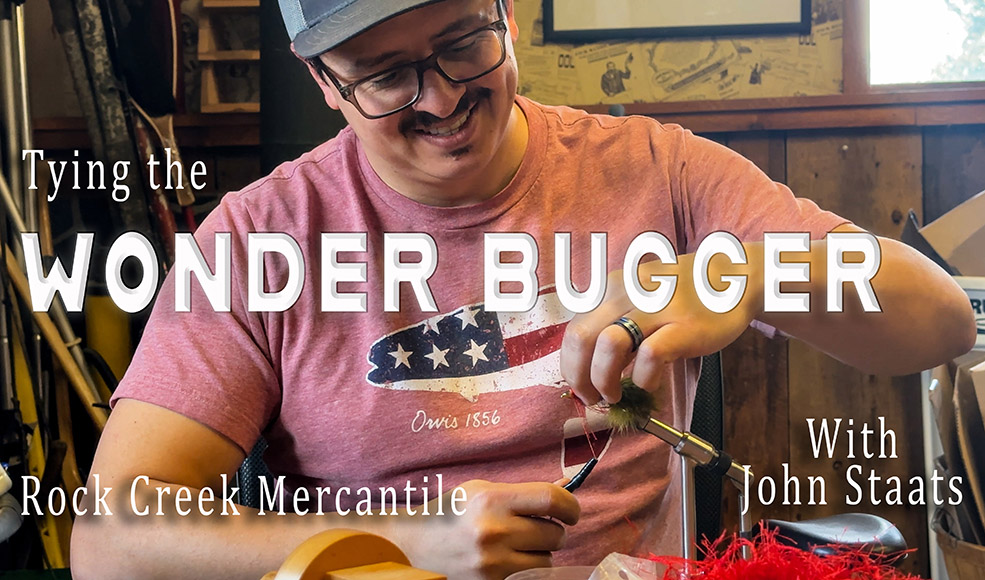 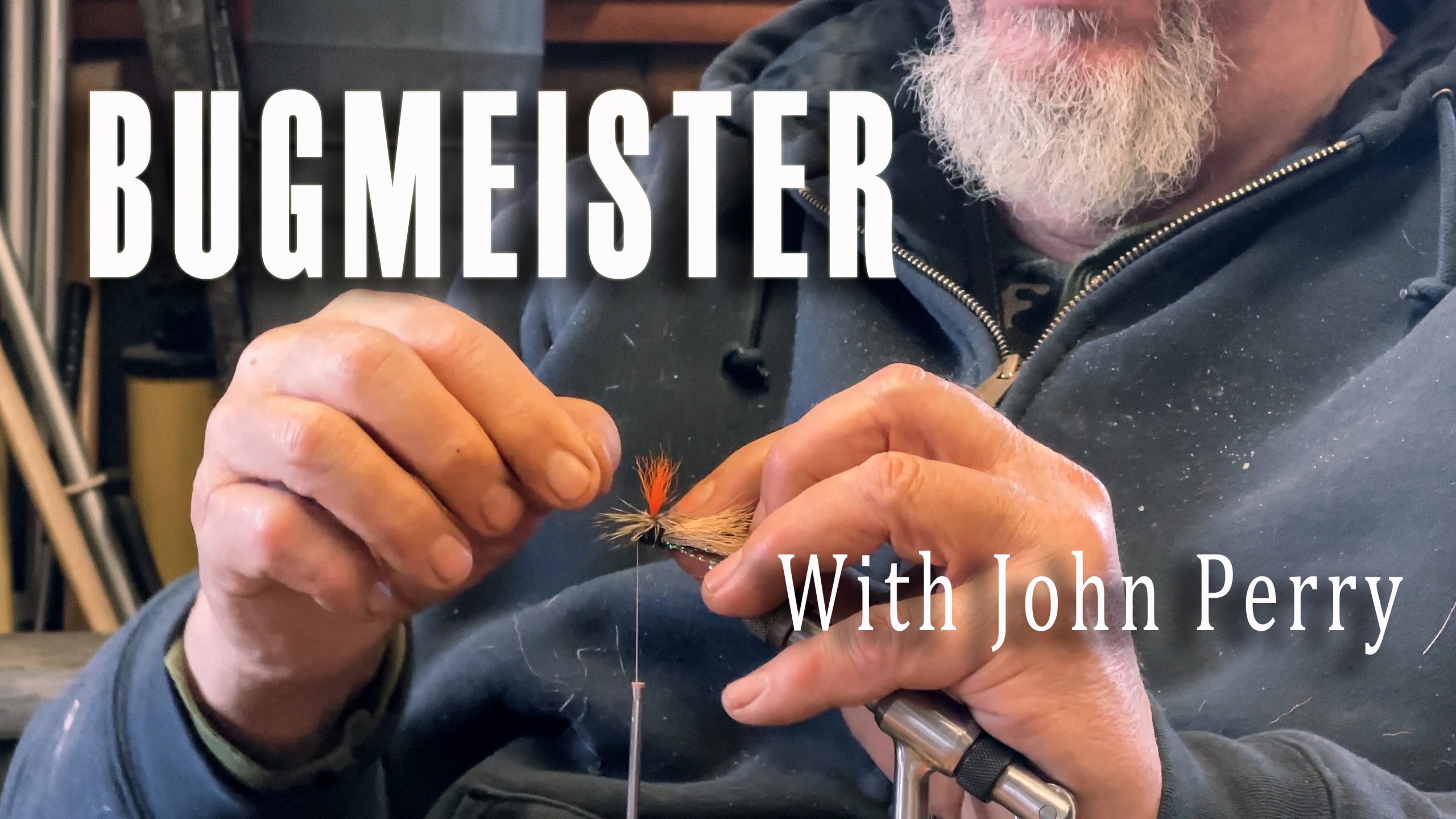